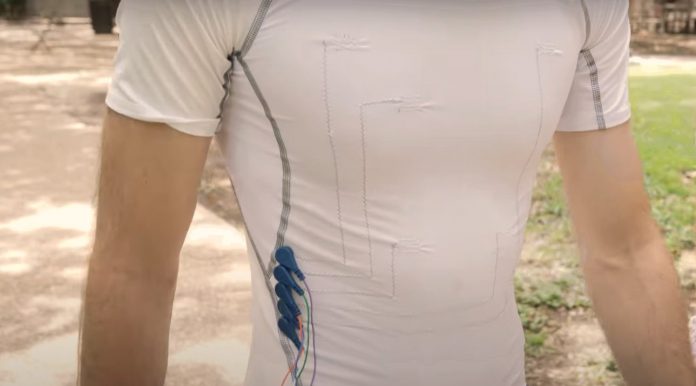 Rice University in Houston, Texas, has developed a method for weaving smart shirt that can detect your heart rate. A tight sporting shirt was produced with conductive carbon nanotube strands that are believed to correctly and efficiently record your heart rate.

The nanotube fibres sewed into the smart shirt was able to take a continuous electrocardiogram (ECG) of the wearer, according to the researchers. The fibres were transformed into sewable threads that acted like metal wires in terms of conductivity.

What They Said About the Smart Shirt:

The zigzag design can be adjusted to suit the stretchability of cloth, according to Lauren Taylor, a Rice graduate student and the study’s lead author. Because the data collected is dependent on the shirt’s skin contact, researchers are currently collaborating with Dr Mehdi Razavi and his colleagues at the Texas Heart Institute to increase the surface area of the clothes to improve skin contact.

Taylor stated in a press release, the garment has to be snug to the chest in order to function effectively and they will concentrate on employing denser patches of carbon nanotube threads with larger surface area to contact the skin.

During live testing, the data collected by the shirt was compared to that collected by traditional chest strap monitors and commercial medical electrode monitors. With the carbon nanotube shirt, the ECG findings were shown to be improved.

According to the researchers, the fibres are machine washable, soft, and flexible, thanks to a zigzag stitching design.

In 2013, the Brown School of Engineering’s chemical and biomolecular engineering laboratory brought nanotube fibre into focus.

The first filaments were extremely thin, measuring roughly 22 microns in diameter. Researchers weaved three such bundles, each with seven filaments, into a thread as thick as a conventional thread to make them into sewable threads.

The garment made of nanotube fibres can do a lot more than merely read ECGs. According to the researchers, the fibres can be used as electrodes to connect Bluetooth transmitters that can provide data to a smartphone or an external monitor. The wearability of these devices has been demonstrated. Researchers now require support from application leaders who can scale up the product’s production and efficiency.

iPhone cameras can be damaged by motorcycle vibrations