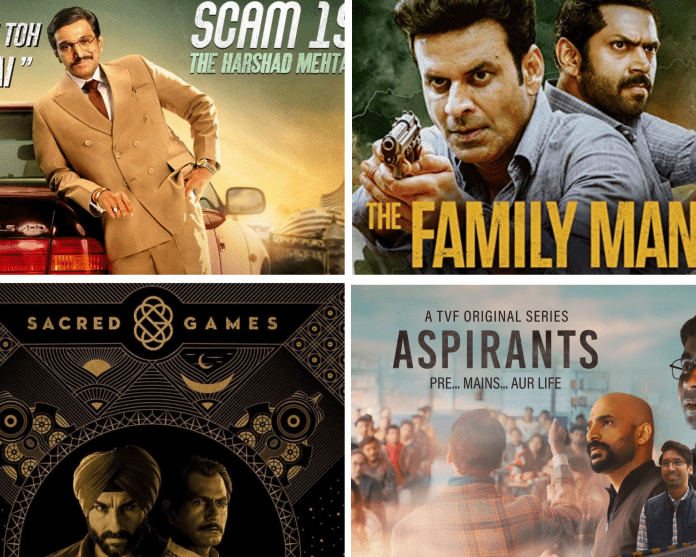 India has begun to capture the world of OTT and some of the best Indian web series dominate the entertainment market. Here is a list of the best Hindi web series you shouldn’t miss.

Aspirants` revolves around the travel story of three UPSC (India’s Public Service Competition Examination) applicants and how their friendship is affected as they progress to success. This is currently one of the highest-rated Web series in the world.

When Police officer Sartaj Singh received anonymous information about the whereabouts of crime lord Ganesh Gaitonde, he set out on a hunt around Mumbai, which would be a dangerous cat and mouse game. In the chaos, the traps of the fallen underworld are revealed. After being expelled from the Gaithonde case, Singh begins his own investigation as he works to save Mumbai from impending doom. Flashbacks reveal some of the crimes Gaitonde has committed over the years.

Family Man is a Prime Video Indian action-drama web series written by Rajinidimoru and Krishna D.K. Starring Manoj Bajpayee and Priyamani are about a middle-class man who secretly works as an agent for T.A.S.C, a fictional branch of the National Bureau of Investigation.

TVF Pitchers is a Web series created by The Viral Fever (TVF) and developed by ArunabhKumar. The season finale was first shown on TVFPlay on August 30, 2015. This continues with four friends, Naveen, Jitu, Yogi, and Mandal, who quit their jobs to develop their own startups.

Akhandanand Tripathi has a mafia boss in Mirzapur who exports carpets and makes millions of dollars. His son Munna, a worthless and power-hungry heir, stops at nothing to inherit his father’s legacy.

Kota Factory is a 2019 Indian Hindi web series produced by Saurabh Khanna and directed by Raghav Subbu of The Viral Fever. The story is set in the context of Kota, the hub of many coaching centers where students prepare for various entrance exams throughout India.

The story told through the eyes of Himmat Singh is based on inspiration from 19 years of nationally significant events, with some espionage done by India over the past 20 years.

Asur: Welcome to Your Dark Side

Asur is a 2020 Indian Hindi-language crime thriller web series, produced by Tanveer Bookwala of Ding Entertainment for the video on demand platform Voot. The series stars Arshad Warsi, Barun Sobti, and Amey Wagh. The series is set in the context of a modern-day serial killer having religious ties.

A dark tale of India’s politics and ambitions unfolding in the corridors of power from behind closed doors. See yourself and justify the ratings.